Live to fight another Cold War 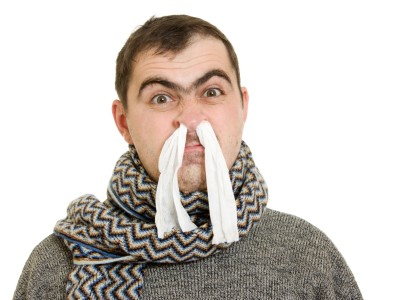 “This winter is going to be the worst winter ever.” These same words have been uttered here in South Africa as many times as; the world is going to end. For the time being I now agree with the fact because now I have a cold and a weaker immune system. If only I started writing this article two weeks earlier, maybe I wouldn’t be sitting here at my office desk with two tissues rolled up my nose and wishing I was on my couch with a hot toddy. I feel like one of those Saint Bernard dogs with the keg barrel around its neck but instead of the barrel it is a toilet roll.

The important thing to know about colds is that there is no drug, herbal or natural remedy that can cure a cold or the flu for that matter. There are over 200 different strands of the virus and they keep mutating into a different strand each year. The products that you get over the counter are just to treat the symptoms of the virus, the runny nose, itchy scratched eyes, headache, fever, fever blisters coughing and muscle ache. What you are buying is medication to combat all the ailments, while your own immune system gets its soldiers in order and starts to destroy the virus infected within your body.

The biggest question I get this time of year is, “Can I train when I have a cold or flu?” I always answer with caution because you don’t want to be “the guy” that says yes and then the athlete dies of a heart attack on the field. Death is happening far too frequently on the sporting fields due to colds and flu’s for me not to give a candid response. Johnny believes wholeheartedly that this is the most important game in the world and that the team and coach needs him to play in order to win. This is a very real but common occurrence with athletes of all ages.

Besides Johnny having other psychological issues of grandeur which need a session on the couch, the important thing he needs to aim for, is to live to fight another day. Colds and flu are mutating to current environmental conditions and they are becoming increasingly more sophisticated and deadly.

When your immune system starts fighting a virus, it is just like a war. The generals send an army of soldiers to the front line and keep sending reinforcements. This war costs time, energy and needs a lot of resources. If Johnny decides to play his game because his cold is “not so bad,” his body is competing on two different levels. A match places a huge amount of stress and strain on the body, the lungs and the heart because your system is competing for resources. Resources for fighting the cold war and the additional production of antibodies and secondly the system is vying for resources for the body’s repair and recovery process after the match.

The problem arises in that your body still has a viral infection but instead of having a full battalion and full resources, it is now shared between attacking the virus and providing energy and nutrients for repair of damaged muscles on a micro level after the match. By taxing your system, it slows down the fight and 9 out of 10 times if Johnny just so happened to survive the match, he would end up taking twice as long in recovering from his cold.

Sportsmen need to understand that your sporting career is a journey and just like a war, there are going to be plenty of battles to fight and prove yourself. Missing one match will not mean the end of the world and your teammates believe me, can win without you. You, your health and longevity is of the utmost importance. Look after yourself and don’t try being a hero or fear being a martyr for others.

Tags: athletes deaths associated with colds and flu's, Can I play a match when I have a cold or flu, colds and flu's cannot be cured, fight against cold and flu's, live to fight another day, over 200 different cold viruses, the cold war, weaker immune system